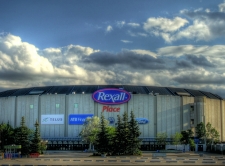 Good ol' Rexall Place. Or Northlands Coliseum if you're a hockey fan of a certain age/nostalgia. This building is the only the place the Oilers have called home during their NHL existence and has played host to one of the most impressive dynasties in the league's history. Can Rexall Place see glory days again before the club moves to Rogers Place in 2016? We'll have to wait and see.

A recent era of absolute futility has taken some shine off this once hallowed building, so let's give the former Northland Coliseum its due. The arena was the place frenzied Oilers fan would go to see Wayne Gretzky, Mark Messier and Jari Kurri lead their team to some of the most impressive Stanley Cup winning seasons in National Hockey League history. Gretzky, Kurri, Messier, Glenn Anderson, Grant Fuhr and Paul Coffey have all earned the honour of having their numbers raised to the rafters in commemoration of the amazing work they've put in at the rink.

Despite having an absolutely dreadful team over the past decade, Oilers fans still stuff this Edmonton arena will zero seats left empty. For a small market, Edmonton manages to have all 16,839 seats in use even in their bottomfeeder years. Through the quirk of the charity point, the Oilers managed to have more wins AND more losses in their home games than on the road in 2014-15. At Rexall Place, Edmonton went 15-23-3. On the road? 9-21-11. Hockey fans in and around the Albertan capital are hoping for better results in 2015-16 and we can't imagine prized rookie Connor McDavid's presence will hurt at the box office if any stray tickets happen to be remaining.

Has A Stanley Cup Final Been Played There: Yes

The St Louis Blues tied up the NHL Stanley Cup Finals at two games a piece last night with a 4-2 win at home over the Boston Bruins. The teams now play a best of 3 to decide who takes home the 2019 Stanley Cup.

As round 1 concludes and round 2 of the NHL playoffs is on the horizon let's reexamine the land.If at the beginning of the NHL season someone were to tell you that at the end of April the New York Islanders were among the betting favorites to win the Stanley you would have had them committed, or offer them some magic beans for sale.

With two weeks remaining in the NHL regular season it's time to get prepped for the playoffs. We're going to examine potential first round matchups, Stanley Cup futures and which teams can win the whole shebang versus those who may turn out to be sheep in wolves clothing.