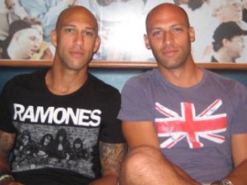 As a relatively new professional sports league, Major League Soccer recently enjoyed its twentieth year in existence. While skeptics weren’t a big fan of the idea at first, the MLS has survived some difficult times to blossom into a twenty team league with representative across Canada and the United States. The cultural influence of the MLS has risen considerably in the past two decades, leading to an explosion of celebrity doppelgangers and lookalikes that eerily resemble popular actors, and even an actress.

Similar to the National Basketball Association, players of Major League Soccer don’t have to deal with helmets or shields that obscure their faces from the crowd. Ergo, fans have a much easier time matching MLS stars with celebrity stars who happen to look alike.

Betting on Major League Soccer action is an enjoyable way to add a little bit of stakes to your own personal entertainment experience. For sports such as soccer where you get to see all the details of the emotions written on a player’s face, the audience has an easier time sharing in on the excitement of the game.