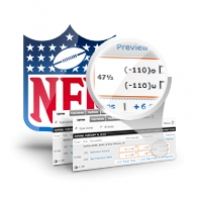 The AFC has been the home of some of the most exciting football ever played, and a few of modern sports’ great dynasties, since the NFL’s merger with the rival American Football League (AFL) in 1970. Most recently, The Patriots have dominated, and won twelve AFC East titles in 14 seasons, since 2001 when Tom Brady was paired with Bill Belichick. The conference has also won 22 of the total Super Bowl games, since the big game kicked off in 1971. The Broncos, the Steelers, and the Patriots have each won 8 AFC titles.  [+]

Since the turn of the century, The AFC has been a top-heavy conference, with The Denver Broncos, the Pittsburgh Steelers, and the New England Patriots all taking turns dominating.

Bookmark this site to get the best American Football Conference betting lines available anywhere on the net. The best bets start here.

Here is a look at the up-to-date American Football Conference Standings. Check back every weekend to see who’s on top and who’s struggling to find the end zone.

How To Bet On American Football Conference

You’d be hard-pressed to find a better team to bet on than either the Patriots or Colts. Many experts have then on a collision course in the AFC title game, and the winner likely winning the Super Bowl. They will both likely have typically big regular seasons, and likely won’t combine to lose a handful of games between the two of them.

The Ravens are still a fascinating pick. We haven’t really seen the best of what they’re capable of. Injuries and inconsistent play has kept them out of the playoffs lately. Now they’re poised to be playoff contenders, and become a team nobody wants to play in the first round. So picking them to upset one of the big boys in the regular season, or the playoff is an enticing bet.

The worst teams in the conference would appear to be the Dolphins, The Browns, The Titans and the Chargers. But each of these teams will respectively likely win 3, 4, or even 5 games. And maybe one or two on the road.