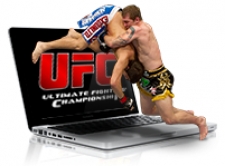 The world of mixed martial arts in North American has grown from that of niche and controversial, to one with millions of fans stretched across multiple leagues. Originally, the sports wasn't allowed in Ontario even though the Canadian fanbase is one of the most rabid. Now the floodgates have opened and Canadians can comfortably watch, bet on and openly support the MMA action.

Top Sites to bet on MMA

With plenty of betting options for Canadian fans, betting on the world of MMA is easier, safer and faster than ever before. Click on the links below and find the most up-to-date odds and information. With lots of league, there is bound to be action to bet on.

Unlike most North American sports where one league dominates a majority of the action and betting, MMA in North American features many leagues, each with unique fighters and plenty of talent to bet on ever week.

The king of the MMA world and a key component to the sport’s rise in popularity and exposure, the UFC and its octagon-shaped ring house the most world class fighters and biggest MMA spectacles. With fight cards stacked with multiple bouts, bettors have an ample amount to choose from.

A relative “newbie” to the MMA, Bellator features tons of great action and some of the biggest name fighters out there. With lots of events, the ability to sway talent from the UFC (especially when fighters get into grudges with Dana White or other executives) and a recent change in management, Bellator offers fans a great experience and plenty of betting options.

King of the Cage

While not officially the minor league of the MMA world, King of the Cage's roster features an array of young talents and ageless veterans. Get a chance to see the future stars of the MMA world before they are calling the UFC or Bellator their home. Or watch one of your old favourite’s in the twilight of their career. With over 50 cards a year, KOTC can satisfy just about every MMA fan and bettor out there.

On Saturday April 13th from Atlanta, Georgia UFC 236 takes place and a pair of MMA's most electric athletes take center stage. Mad Max Holloway and Israel Adesanya both look to take the next leap in their star studded careers.

Are the Colts for real? Did the Rams peak too early? Is this finally Philip Rivers' time and will Nick Foles and the Philadelphia Eagles ever lose a playoff game? Find out the answers to all these questions in our NFL Divisional round preview.
Read this article
Online Betting News - 18/12/18
Odds to win the 2019 NBA Championship 2019

The NBA is unique in this one aspect; even with approximately five months left in regular season we can know who the best teams are in league and still be right in the spring and summer when the NBA playoffs begin. So with that being said let's ask ourselves if we are betting on any team to win the title other than the Golden State Warriors, are we overthinking it?

At the moment the NFL has 12 teams currently in playoff spots. However there is a log jam of 7 teams combined in both conferences that are 6-6 and fighting to sneak into the playoffs. That means there are lots of week 14 matches that feel more like playoff games than regular season. We sort through the rubble to try and find this weekend's best bets. Check out the best NFL predictions below.
Read this article
The Pages You Like the Most