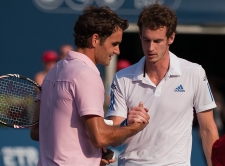 Organized tennis tournaments are some of the longest running sporting competitions in the world, with the most prestigious event, Wimbledon, beginning in 1877 at the All England Lawn Tennis and Croquet Club. Similar to other major international sports, the game of tennis has changed considerably over the past century or so, with a quality of play reaching heights that McEnroe, Evert, Navratilova, Lendl, Jean-King, Becker and Borg never imagined possible. The modern game has been dominated by a select few, including Roger Federer, Rafael Nadal and Novak Djokovic on the men's side and Serena and Venus Williams on the women's side of the competition.

Since 2004, only six other men have won a grand slam title other than Nadal, Federer and Djokovic, while Serena Williams and Venus Williams have taken 28 grand slam titles since the 1999 U.S. Open. This includes 21 slams for Serena, who recently cemented her fourth consecutive grand slam, earning a 'Serena Slam' that began with the 2014 U.S. Open and completed with Wimbledon 2015. She looks to become the first since Steffi Graf to win all four in the same year.

The most popular type of tennis betting deals with simply predicting the winner of the match. Similar to other moneyline bets, those with a plus moneyline are considered underdogs while the negative moneyline is the favorite. If you choose Roger Federer at -225, you have to bet $22.50 in order to win $10. However, if you choose Milos Raonic to win at +225, a wager of $10 would result in a payout of $22.50.

Betting on the Spread

Another type of tennis betting involves predicting the spread between two players. If Serena Williams has a spread of -5.5 games against Maria Sharapova, Serena has to win six more games than Maria in order to cover the spread, while Maria can still cover the spread as long as she loses by 5 games or less.

Many different prop wagers are available that diversify the action for tennis betting aficionados. You can bet on a single set, who gets more aces, who wins the first set or try to predict that exact outcome of the match. Betting on the over/under for the total amount of sets played allows you to double up when betting on heavy favorites. Combining over/under on sets played with bets that predict a player will win at least one set in a match also doubles up the action.