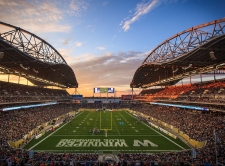 Though it lives under the shadow of the NFL for the most part, the CFL is its own self-sufficient and entertaining football league that most Canadians love. Since its inaugural season in 1958, the CFL has brought fast-paced beautiful football for Canadians and this can’t be more obvious than within the raucous confines of each of its nine stadiums in nine cities around the country.

Many teams predate the CFL’s inception date and coupled with a rich history, the CFL is a different brand of football that is just as if not more exciting. We ranked the nine CFL stadiums on how well they integrate the different ingredients on what builds a successful stadium using these criteria. [+]

The CFL season begins the weekend before Canada Day in July 1st and ends sometime in early November. Each team plays 18 games over the span of 20 weeks. Each team plays three games against two teams from its division, and two games against the remaining six teams on a rotating basis. Each team gets two bye weeks except for one team that plays two games in one week and receives an extra bye. Because of the odd number of teams, there is likely to be a team on bye every single week.

The CFL is aired exclusively by TSN (RDS in French-Canadian) in all its networks including the CFL Playoffs and the Grey Cup. A full list can be found on the TSN website. For international coverage, ESPN2 and ESPN3 will primarily be airing the CFL.

Canadians love their football. While many prefer the NFL, more enjoy the CFL and its more free-willing set of rules that allows for more room for teams to operate. They don’t only watch but get into betting as well. Don’t be fooled into thinking there isn’t money flowing through the CFL betting lines. On the contrary, they are one of the busiest with our 100% verified bookmakers that offer the best betting lines. Scores are regularly updated and a signup bonus of up to $200 is offered for new players who want a piece of the pie.