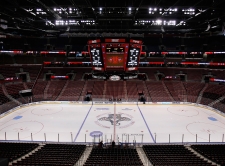 If you'd like to catch a National Hockey League game in person, Florida's BB&T Center can accomodate. After all, plenty of seats always seem to be available at this Sunrise-set arena. That said, maybe a string of winning seasons from the Florida Panthers can help improve the atmosphere of their Sunshine State digs.

After a brief stay at the simply monikered Miami Arena, the Florida Panthers ventured off to Sunrise with the BB&T Center serving as the team's home since 1998. The club's miracle Eastern Conference clinching season happened two years previous to the big move, so this arena has plenty of storybook space to add moments of triumph. Despite having stars like Pavel Bure, Roberto Luongo and Jay Bouwmeester calling this rink home, only two playoff seasons have been accomplished since moving in. The biggest bright spot at the BB&T Center for Florida? Jose Theodore blanking the New Jersey Devils 3-0 in Game 5 of their 2012 Conference Quarterfinal tilt.

Attendance has been a major issue at Sunrise's shiny playground. The Panthers finished dead last in the league in arena capacity in 2014-15, although it should be noted that the team's ownership have done away with heavily discounted tickets and giveaways in a bid to show respect to season ticket holders that shell out full price for ducats. Have the Panthers stunk in front of an under-filled arena? Nope! 21 of the team's 38 wins last season were racked up at the BB&T Center. Seeing as Florida showed some life in their run at the playoffs last spring, there's a chance imaginations could be sparked and tickets will be snapped up.

Has A Stanley Cup Final Been Played There: No

The St Louis Blues tied up the NHL Stanley Cup Finals at two games a piece last night with a 4-2 win at home over the Boston Bruins. The teams now play a best of 3 to decide who takes home the 2019 Stanley Cup.

As round 1 concludes and round 2 of the NHL playoffs is on the horizon let's reexamine the land.If at the beginning of the NHL season someone were to tell you that at the end of April the New York Islanders were among the betting favorites to win the Stanley you would have had them committed, or offer them some magic beans for sale.

With two weeks remaining in the NHL regular season it's time to get prepped for the playoffs. We're going to examine potential first round matchups, Stanley Cup futures and which teams can win the whole shebang versus those who may turn out to be sheep in wolves clothing.