The unofficial second half of the 2016 MLB season is in full swing and that means teams across the league are scoreboard watching and jockeying for a position in the MLB playoffs. As a baseball bettor, this is a very exciting time because it gives you a chance to thoroughly analyze what teams are contenders and what kind of odds they have to win it all. Finding value on some smaller darkhorse teams at this time of year can be a great bankroll boost at the end of October. 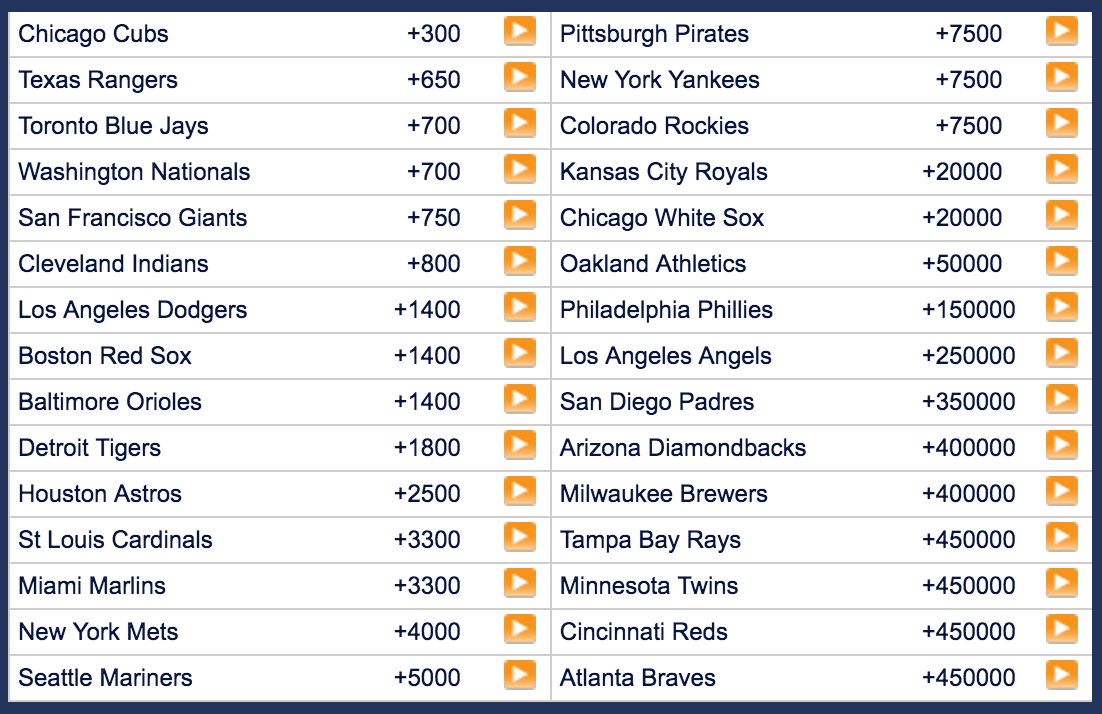 Hitting those bigger payouts with future bets are really nice, but it still take a lot of work digging through stats and getting a little lucky as well. This time of the year in the baseball season enables bettors to eliminate about half of the teams from World Series contention which is a much better proposition than preseason bets when everything is still possible. By now, that separation between playoff bound teams and those completely out of the race gives bettors a better chance to cash in in October, especially if one of those “fringe” teams currently on the outside of the playoff picture makes a late run in September to get into the playoffs and gets hot from there. The addition of the second Wild Card berth a few years ago made that possibility much more real and it's those teams that have some really nice odds attached to their World Series hopes right now.

That being said, bettors can always spread out their risk on 2016 MLB World Series Futures by getting action down on multiple teams in the hunt, so let's get right to a few squads we like this year from each league.

My Team's Next MatchToronto Blue Jays

The Toronto Blue Jays are in an intense three-way battle with Baltimore and Boston for the AL East crown and there is a good chance at least two of those teams will be playing playoff baseball. Toronto had a nice run in October last year to the ALCS (losing to Kansas City) and the team is built to win now and make another run at it in 2016. With DH Edwin Encarnacion currently leading all of baseball in RBI's and reigning MVP Josh Donaldson actually having a better year statistically then he did in 2015, the stars in Toronto's lineup have really shown up again this year.

The biggest question surrounding the Blue Jays chances this year concern their pitching (starting pitching and bullpen), but with a run differential of +85 at the time of this writing, their offence can erase plenty of mistakes the pitching staff makes. Last year's run to the ALCS proved that their offence can do big things against tough pitching in October, and with a likely Wild Card berth at worst in store for Toronto this year, the +700 odds currently offered at Sports Interaction can return a nice profit.

My Team's Next MatchBoston Red Sox

Boston is the other team I expect to come out of the AL East in some form, as I expect the Boston Red Sox to be the ones that end up claiming the division and getting home field advantage in at least the first round of the playoffs. They've got a great lineup from top to bottom and the mixture of youthful talent and veteran guys still producing at a high level point to big things for Boston in 2016.

Like the Blue Jays, pitching is a concern for Boston going forward, but their offence can mash with the best of them and erase pitching blunders as well. It would be quite the story for 40-year old slugger David Ortiz to retire on top with another World Series championship and the +1400 odds are too good to pass up on a likely division winner.

My Team's Next MatchHouston Astros

At +2500, the Houston Astros are another AL squad that presents plenty of value to win it all this year as this young team looks poised to take the next step after a playoff appearance a year ago. Houston has been able to put a really rough month of April behind them to be serious contenders in the AL West and you shouldn't be shocked to see the Astros end up claiming that division by the end of September.

As long as Houston is able to punch their ticket to postseason baseball, the Astros are going to be a team that nobody wants to face in October. They've got minimal concerns aside from their youth, but last year's experience in the ALDS should do plenty to alleviate those concerns.

My Team's Next MatchChicago Cubs

The Chicago Cubs entered this year as the favourites to win the World Series and they've done nothing to question that position as of yet. They've got a tremendous pitching staff that is built to win in October and their run differential of +151 is by far the biggest in all of baseball.

Last year's trip to the NLCS provided valuable experience for this young team and while there is not a whole lot of value in taking the Cubs at +300, it's tough to think that they won't be in at least the NLCS again this year.

My Team's Next Match

The Washington Nationals are another team that's got their eye on the big prize this year and at +800 there is a bit of value in taking the current NL East leader. Recently, Washington has been defined by their lack of postseason success and that is a concern for bettors, but the 2016 version of the Nationals look poised to rewrite that script and make a deep playoff run.

Washington is 2nd in the league in run differential (+700) and have finally added enough talent around MVP Bryce Harper to be considered a “complete” team. They should be able to run away with the NL East title by the time September rolls around and will definitely be a contender to win it all in 2016.

My Team's Next MatchLos Angeles Dodgers

The LA Dodgers are the biggest “longshot” on this list at +2000 and the prospect of losing P Clayton Kershaw for the year has become a big deterrent for those that were considering backing the Dodgers. However, L.A has been playing some very good baseball since Kershaw went down and you know with their willingness to spend money at the deadline to bolster their chances, the Dodgers brass will make sure they remain a contender the rest of the season.

Even without Kershaw for nearly a month, the Dodgers have managed to close the gap on San Francisco in the NL West race, and if Kershaw doesn't go under the knife, getting him back at some point this year would be a huge boost for this squad. LA has tremendous pieces up and down their roster to make a significant run at winning it all this year and for a team that's likely to have home field in a Wild Card game at worst, taking the +1400 odds could end up paying off big time.