Odds To Win The NBA Championship 2017

Just like the NHL season, the NBA All-Star game is in the past, and we enter the nitty-gritty of the season. It's time to take another look at the best value picks for winner of the NBA Championship. The Golden State Warriors have the best record in the league once again, but will it be enough to even secure a place in the Finals. The San Antonio Spurs and Houston Rockets are close behind, and the Los Angeles Clippers matchup well with GS and might cause them problems. Are they worth a play at the current price? To get the Futures odds, Sports Interaction has the best, so if you don't have an account with them, get on it before the season's over! 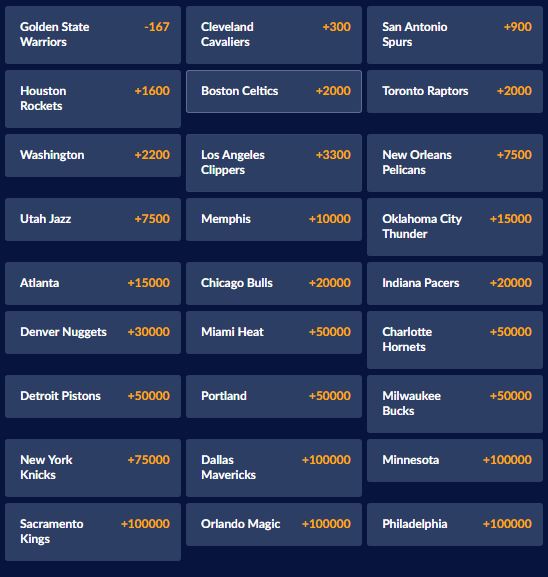 Don't seem shocked. The Cavaliers are the best value of the bunch right now. With such a weak Eastern Conference, the Cavs are all but assured getting to the Finals, unless the Boston Celtics or Toronto Raptors claw their way back to being contenders. If the Cavs get to the Finals and face the Golden State Warriors again, you can rest assured that the public will be all over GS. With the addition of Kevin Durant, this team seems unbeatable, but we all know the script never goes as planned. Even with Durant, if the Warriors face the Cavs in the Finals again, look for yet another upset, with Lebron cementing his legacy even further and breaking West Coast hearts once again.

NBA Outright - Who's Your Pick?

So it might not be the Cavs and Warriors facing off again. In that case, which pick should you go with? If the Cavs face the San Antonio Spurs or Houston Rockets, it might be wise to lay off them. It's entirely possible that Golden State won't make it to the Finals again, maybe even upset in the 1st or 2nd Round. If the Spurs make it, look to make a play on them, as their coaching will carry them far in the playoffs, and could set them above the Cavs in a 7 game series. Houston is a different animal though. They don't have the same depth or consistency as the Spurs. If the opposite happens, and the Golden State makes it to the playoffs and not the Cavs, then by all means in this situation, take the Golden State Warriors.

It might not be a 4 game sweep, but it won't look good for whichever Eastern Conference team they are taking on. For now though, our play is on the Cleveland Cavaliers, as it seems it'll be another Cleveland vs. Golden State Finals at this point, and at the +300 you can get at Sports Interaction, you're getting great value on the current champs. What do you think? Comment below on who you think the winner will be and which odds have the best value.