April is still two months away, but the All-Star game is long gone, and the season is winding down. While every team had hopes to claim the Cup this year, it's clear that at this point only a few really have a chance. We'll break down some of the best valued future bets out there for the winner of the Stanley Cup. Sports Interaction has some of the best odds available so if you don't have an account there, you can sign up here. Don't miss out! 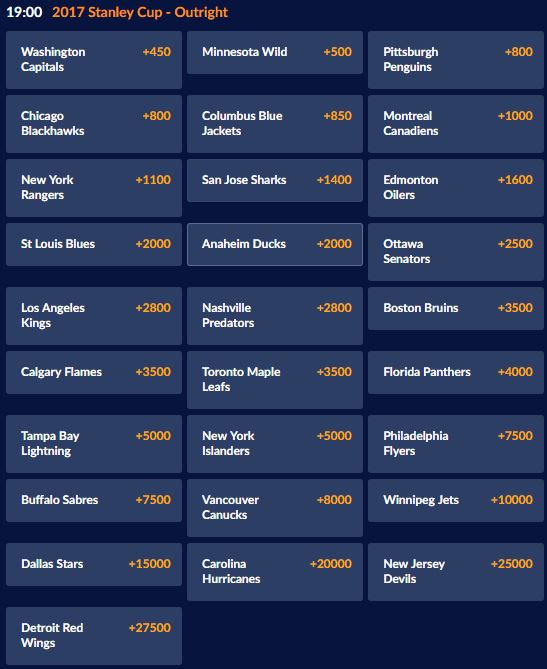 Don't overthink this one! The Washington Capitals are focused and have the talent to take home the Stanley Cup. At +450 they are a steal. Why? There are less than 5 teams in the league who have the chance of beating them in a 7 game series.

After winning 56 games to clinch the Presidents' Trophy, but choking to the Pittsburgh Penguins last season, they will be intent on avenging that this year. Choking does seem to be the Caps' strength though, not having advanced past the 2nd Round since way before Alex Ovechkin joined the team. What's different about this season? Well the Capitals know Ovechkin's their only hope of winning the esteemed trophy, and after 10+ years in the league, he is in the final years of his prime. He might have another 2 years of insane point totals, but for the Caps, it's go time. They have great goalscorers, and an amazing defense, only letting in 126 goals so far. They have an extraordinary +69 goal differential, mostly coming from defense, and we all know that's how you win championships. Take the Washington Capitals to win the Stanley Cup at +450.

NHL Outright - Who's Your Pick?

There are some other teams that could provide good value. Others, not so much. The San Jose Sharks are at +1400 might even have better value than the Capitals, but they realistically do have a significantly worse chance of winning the Cup. Nonetheless, they are currently 3rd in the Western Conference, and always manage to surprise in the playoffs. At the current price, it makes for a good pick, considering they have the same amount of points as the Chicago Blackhawks.

A team to avoid would be the Minnesota Wild. Don't get us wrong, they are a great team, and have surprised this season, starting off at over +1000 and now at +500. The problem is that at +500, they have zero value. That much of a change isn't always a good thing. They do have a similar goal differential and defensive layout as the Caps, but if a team's coming out of the West, it will be either the Blackhawks or the Sharks, not Minnesota.