After the stunning conclusion to last year's World Series, which saw the Chicago Cubs come back from the brink of destruction to win 3 games in a row and take the the championship in style, we look forward to the upsets and unwritten stories of this year. Sure, October is still an eternity away, but preseason is just a few weeks coming, so let's take a look at which team has the best value to win it all. We'll also see if any other teams are worth a play. Sports Interaction has some of the best outright odds for the World Series, so if you don't have an account yet, you're missing out. 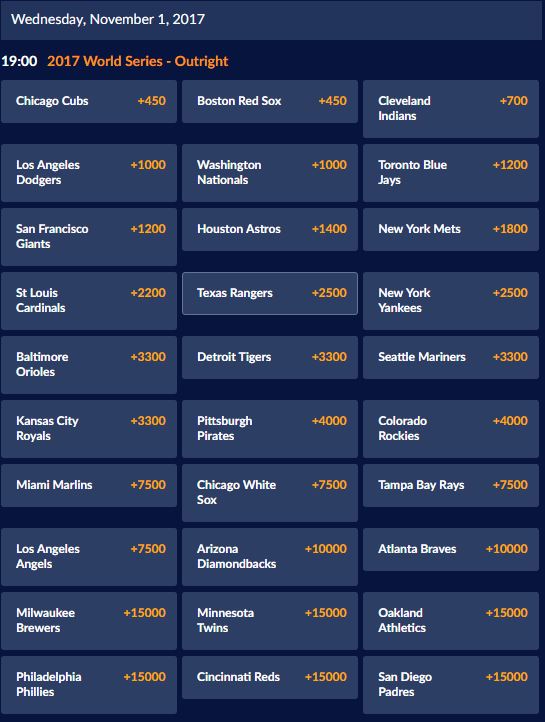 Believe it or not, the Los Angeles Dodgers at +1000 is quite a generous price for a team of this caliber. The reason this is a great pick is simply because they have what it takes to become champions. They have pitching and defense. They don't just rely on bats. Not only that, but looking at the other teams in the top spots, we just can't find any real value. The Chicago Cubs are favored to take it (so is Boston), but at +450, it's just not a good deal. They broke the curse, and there's no better indication of a fat, happy, and satisfied team than that. The Cubs will NOT take it again. They have a huge projected win total of 95.5, which isn't a good sign if you're looking for value. Things might change, but stay off them at this point. The Cleveland Indians should not be at +700 either. After overperforming last year, they will fall back towards the mean. They do have great pitching, but after that massive letdown in the World Series, it will take a while before they can be ready again, and might not even win a series in the playoffs this year.

MLB Outright - Who's Your Pick?

Apart from the Los Angeles Dodgers, the Boston Red Sox could be another good choice but hopefully there will be a time we can get them at a slightly better price. As we're going for value here, it would be amiss to skip over the Miami Marlins. It's been exactly 20 years since they've won a championship and with the memory of Jose Fernandez still in their heads, they will want to make place their mark on this season. They might not win it all, which is why they aren't our first pick, but they will definitely overperform, making the +7500 a great play. The Washington Nationals might also be a play, but it's one we'll have to lay off of for now. They might cruise through the season, but hit huge roadblocks in the playoffs. The San Francisco Giants with their great management, and Houston Astros, if they can win their division, are also two teams to keep an eye out for.