Who is favoured to go to the Super Bowl?

With only one week left in the 2016 NFL season and the playoff picture almost completely set, it's time for NFL bettors to turn their attention to Super Bowl 51 and which team will end up hosting the Lombardi Trophy at the end. The 2016 NFL season has been filled with parity and mediocrity for the most part, but there are a handful of teams that have seperated themselves from the pack and established themselves as the favourites to go to Super Bowl LI. Let's take a look at some of those teams:

Let's take a look at some of those teams:

There is no better place to start looking at the teams that are favoured to reach this year's Super Bowl then by checking out the futures odds at your sportsbook. Here are the odds from Sports Interaction for each team to win their respective conferences and make it to the big game: 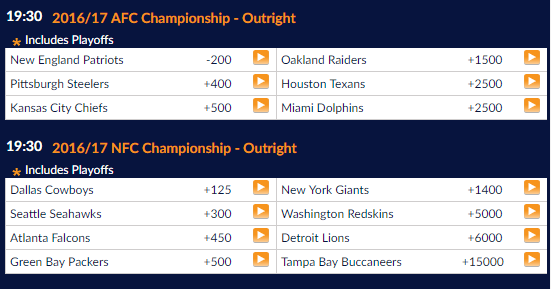 As you can see, the entire AFC playoff picture is already set in terms of the six teams with a chance and the odds suggest that the New England Patriots will be the team to beat. At -200, chances are we see Bill Belichick and Tom Brady get to their 7th Super Bowl since 2001, an astonishing feat to say the least. New England hasn't clinched home field advantage throughout the playoffs yet, but with the Oakland Raiders being the only team that could catch them and Raiders QB Derek Carr lost for the season, the road to the Super Bowl in the AFC will likely go through New England and the Pats.

For the five other franchises looking to knock off New England, Pittsburgh arguably has the best shot. The Steelers have an explosive offense that can put up points on anyone, and their defence has started to hit their stride the past month or so. Pittsburgh also has that championship pedigree with HC Mike Tomlin and QB Ben Roethlisberger, so at +400 there is some value in backing the Steelers in the AFC. There is no question though that it will be New England and Pittsburgh that get the most support from bettors - professional and recreational - as the four other teams all have tangible concerns on one of both sides of the ball, with Oakland, Houston, and likely Miami needing to ride back-up QB's to go all the way.

The picture in the NFC is a little muddier and won't see any one team get overwhelming support like New England in the AFC. #1 seed Dallas has clinched home field advantage throughout, but the Giants have already beat them twice, while Seattle, Green Bay, and Atlanta are more then capable of going into Texas and knocking off the Cowboys. It might be wise to wait until the regular season has concluded to see how the seeds shake out in this conference before plotting the path to the Super Bowl for the team you are looking to bet on.

As you can see with the remaining NFL teams left this season, the 2017 NFL playoffs should be jam-packed with action. While it may seem to some that it's a foregone conclusion New England will be the AFC's representative in Super Bowl 51, upsets occur all the time in the NFL playoffs and this year will be no exception.

If you are a bettor that likes to take value earlier then most, betting on the team to not only get to Super Bowl 51, but win it may be the better option. That's especially true for Patriots backers as they are +200 to win it all; a much better price to bet than -200 just to get there. You can check out the odds offered for these NFL teams to get to, and win Super Bowl 51 below: