World Series Opening Lines: The Houston Astros to Repeat in 2018?

Is this year, your team’s year? If you’re an LA Dodgers fan, you’ve probably felt that way since 2013. But if you were betting on them, you’d be pretty frustrated and no richer right now.

Betting on MLB Futures is tricky. You can’t predict season-long slumps, hot streaks, or season-altering injuries. You can look at things like organizational stability, and depth. Thes are two hallmarks of a World Series team, year after year. So who is poised to win it all next year?

Let’s take a look at some of the favorites.

Man, Dodgers fans, we feel your pain. It’s hard to know what you need to do to win a World Series. You have the best pitcher in the game in Clayton Kershaw. He is the base for the best pitching staff, top to bottom, in baseball. You’re scouting team has gift wrapped you the rookie of the year in consecutive years (and 7 times since 1992). But you still cannot seem to be the last team on the field in October. Stay the course. Harvest your youth, keep your starters healthy and next year will be the year... But stop us if you’ve heard that before.

Damn the Yankees. Damn them! They were supposed to be down this year. This was supposed to be a time to rebuild. The thing about the Yanks is they can still make the playoffs during a rebuilding process. The rest of the American league thought they had a year or two off from Yankee dominance… and then Aaron Judge happened. The 25-year-old tall drink of handsome hit a homer in his first appearance and didn’t look back. He smashed all kinds of team and MLB records, and not all of them for rookies. He’s the face of the franchise for years to come and will be the centerpiece of their free agent lure.

Sorry Jays fans, things are looking blue. A brief Toronto-wide pandemonium of the Raptors and Blue Jays making the playoffs and winning a series in consecutive years showed the world how crazy Toronto sports fans can be. Now, the Jays are down and the Leafs are up. The Jays struggled with maddening inconsistency in every single aspect of the game last year and finished out of the playoff picture and 10 games under .500. They also parted ways with their franchise’s most popular (and arguably most) loyal player. Is this a cost-cutting measure that will open the door for young talent? Or a soul-flushing move that will stick a fork in the franchise for a few years?

Experts are giving this team the best odds to repeat and win it all. And for good reason. They are simply stacked. They won over 100 games in the regular season and their first-ever World Series. The band has pretty much stayed together, with no major changes, so look the hell out in 2018. 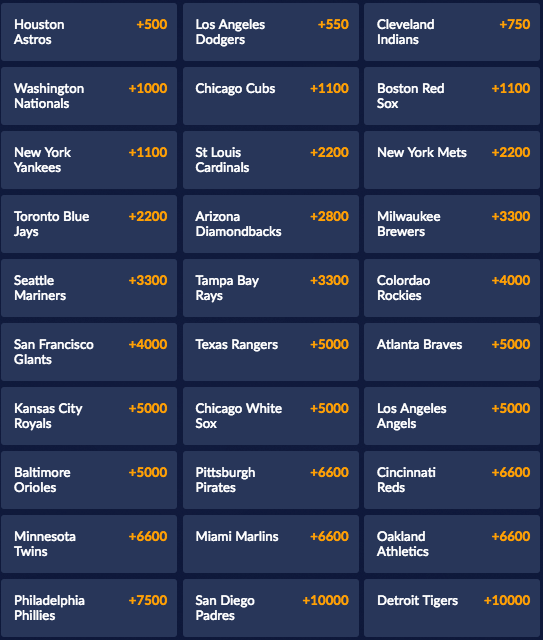 Looking to get into betting on baseball next year? Canada’s very friendly online betting laws mean you will have no shortage of options. But we think that Sports Interaction stands above the rest for online betting. They are our top reviewed sports betting website (and trust us, we’ve tried them all) because of their ease of use, their steadfast security, and the fan-friendly promotions.

Right now, they have a great introductory offer. You can get a 100% bonus on your first bet, up to $200.00! It’s incredibly easy. Just create your account, make your initial deposit using one of many payment methods, and claim your bonus. It’s a nice top up to start your sports betting.