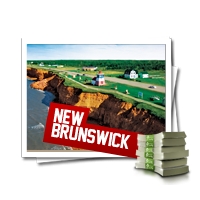 As Canada’s only constitutionally bilingual (English-French) province, New Brunswick is comprised of an idyllic union between Anglophone and Francophone Canadians. It represents one of Canada’s three Maritime provinces and is the second-largest with just under 800,000 people. The province doesn’t have any pro sports teams although the CFL may expand to the Maritimes soon. With a sizable French population, the Montreal Canadiens and Alouettes are popular teams.

Like their neighbours to the west, the New Brunswick bettors get to enjoy the Atlantic Lottery Corporation’s (ALC) Pro-Line stadium, a website similar to the Pro-Line games the WCLC and OLG sponsor in the Prairies and Ontario, respectively. While residents get to bet online, the website still leaves much to be desired especially in comparison to these superior online sportsbooks below.

New Brunswick sports fans may envy Ontario for its wealth of teams but the gambling scene is significantly better here. The province falls under the umbrella of the ALC and along with the Great Canadian Gaming Corporation, own the Casino New Brunswick, the province’s best casino. With a top-level hotel, spa, and special events it is the premiere destination. Horse racing fans can get their fix at the Fredericton Raceway. The betting landscape in New Brunswick is primarily controlled by the Atlantic Lottery Corporation (ALC) who use the Pro-Line Stadium platform. Available online, or through local lottery retailers, bettors pick from four betting boards: Stadium Bets, Pr-Line, Pro-Line Futures, and Pro-Line Fantasy. While the parlay requirements are cut from three to two and buying tickets online is convenient, this still can’t compare to better online bookmakers.

While the Stadium only has a two-wager requirement, the TIE rule and general lack of choices make it inferior. The shortcomings of the Pro-Line Stadium are the gains of better online sportsbooks, which have, but are not limited to, the following upgrades:

The Alternative To The New Brunswick Lottery

The ALC’s Pro-Line Stadium is great and a more relaxed version of other betting platforms. New Brunswick folk have it easier compared to three-quarters of the nation but with that said, it’s still a rip-off in comparison to betting online with the best bookmakers like SIA. Cashing a two-leg parlay is easier than a three-legger but even still, the ALC “taxes” you for the payouts.

It’s been proven the payouts at the Pro-Line Stadium are watered down in comparison to the online sportsbooks. So players have to risk more to win less with the ALC’s rules. That doesn’t sound fun or smart. With the online books, parlays are not mandatory and the payouts will be significantly better. Further more, there are signup bonuses up to $200 in cash value and parlays are just one of many ways to bet. Wasn’t able to bet on the Montreal Canadiens because you stayed in late at the office? That’s alright. So long as the game is still before the last period, live betting lets you still stake money on them. Or if you like them to win the Stanley Cup and are so confident you already know before the first game of the playoffs even happens, you can bet too.Gambling becomes more fun and profitable, the way it should be.

Gambling becomes more fun and profitable, the way it should be.