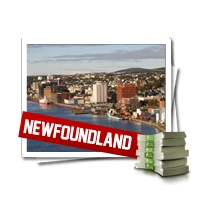 Newfoundland and Labrador is one of the country’s four Atlantic provinces. Over 90% of the province’s 526,000 residents live on the island of Newfoundland and its neighboring smaller islands, of whom more than half live on the Avalon Peninsula. Though they are lacking in the sports category, the beautiful denizens of Newfoundland and Labrador still enjoy their gambling on top of taking in the breathtaking scenery of one of the world’s premiere tourist destinations. Here is a look at the sports betting scene for Canada’s youngest province.

One would think living in the closest thing to paradise that the residents of Newfoundland and Labrador wouldn’t have much need to gamble but they do. It’s a thrill and as part of the ALC, the residents gamble through the Pro-Line Stadium, which isn’t perfect but is one of the best betting platforms for Canadians. Better online sportsbooks below however blow it out of the water.

The good outweighs the bad living in Newfoundland but gamblers will be hard-pressed to find the right avenues outside the ALC’s Pro-Line Stadium to fit their gambling needs.

The province is the only one in Canada without a land-based casino and horse racing wagering was shut down early in 2016. Still, talks of major hotel and casinos’ constructions are still in talks with the government despite their adamance against it. The Pro-Line Stadium isn’t as great as the BCLC’s PlayNow but it’s still a decent platform. As members of the four-province Atlantic Lottery Corporation, the Stadium gives access to every Newfie. The old pencil and paper method is still available but being able to bet online is a massive plus even if the betting odds are watered down and there is still a two-wager minimum on top of TIE rules stacked against the bettors.

If the Newfoundland residents don’t want to venture out of the Pro-Line Stadium that is their prerogative. Money can be made there but just to give them a sense of what they are missing out, here are the advantages online sportsbooks have:

The Alternative To The Newfoundland Sports Lottery

It’s understandable if Newfoundland residents want to keep supporting their local Pro-Line Stadium. It is a decent betting platform but just to illustrate how it’s still rigged heavily for the government, take the example of some NFL action.

A Newfie wants to bet on the Buffalo Bills at +185 and the New England Patriots at +115. Both teams not only have to win but win above three points and will only net $379.82 on a $100 bet. In comparison, the same parlay nets $513 for a top sportsbook like SIA.

Facts are facts. Continuing to play the ALC’s Pro-Line Stadium is risking more for less. With the top online books, there is also a signup bonus of up to $200 in cash value and it has a plethora of benefits as they are listed above. But the most valuable is doing away with forced parlays and TIEs leading to a loss. Redoing the scenario above, a gambler can now risk $50 separately on the Bills and Pats and while the payout will be significantly less, the risk is even lesser.

If only one of the two win, Newfie Joe will still profit slightly. And it isn’t just allowed, it is encouraged. Make gambling fun again and give the sportsbooks a shot.