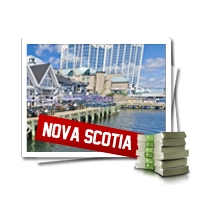 Part of the original Canadian confederation in 1867, Nova Scotia is also the largest province in Atlantic Canada and is just barely connected to New Brunswick with a thin trip of land.  Canada’s Ocean Playground is home to many picturesque views but its denizens also have a few local sports clubs in a semi-pro and amateur level to cheer for. The Halifax Mooseheads and the Cape Breton Screaming Eagles of the Canadian Hockey League (CHL) are particularly prominent.

Like their fellow Atlantic Canadian counterparts, Nova Scotia is ruled by the Atlantic Lottery Corporation and its Pro-Line Stadium platform. It is one of the best betting systems in Canada being online and only needing two wagers to cash as opposed to three from the regular Pro-Line in Ontario and the Prairies. There is still plenty missing from this site and gamblers still find themselves on the short end of the stick. The remedy is to check out the best online betting options.

The lack of any major pro sports teams doesn’t deter Nova Scotians from having a grand time at the lotteries. “New Scotland” is home to two Las Vegas-style casinos with both venues housed in lavish historic-style Maritime lighthouse themes. Horse racing is huge in Nova Scotia as live racing runs at tracks in Truro, North Sydney, and Inverness get the crowd fired up despite shady ALC and VLT betting schemes. The ALC Pro-Line Stadium is the only legitimate “local” betting platform.

Gamblers can go online to or use the ancient pencil and paper method available across lottery retailers. Surprisingly, having an online platform already puts the province ahead of the likes of the Prairies and Ontario and cutting the three-wager requirement to two is a plus but in comparison to online sportsbooks, the Stadium just can’t hold a candle.

Most small-time gamblers may be content the ALC Pro-Line Stadium. It’s serviceable but those who are looking to have more fun and get more value for their hard-earned money will turn to better online sportsbooks like SportsInteraction, which have a lot more benefits:

The Alternative To The Nova Scotia Lottery

Give the ALC credit where it’s due: they made betting in Atlantic Canada easier and less of hassle with the Pro-Line Stadium. Two-leg parlays are easier to cash than three-leggers and having an online platform beats having to physically go to your nearest convenience store to purchase tickets. But it’s still a watered-down system that takes a good chunk of potential winnings from bettors.

Heading over to SportsInteraction, one of the premiere betting sites, a two-team parlay between underdogs priced at +255 and +200 delivers a $965 profit on a $100 bet while with the Pro-Line Stadium it only delivers $697, only 72% of what bettors should have won. It’s not rocket science. Head to the platform that rewards gamblers more. With SportsInteraction and other sites, not only are the betting prices much better but single wagers are allowed. On top of that, several sites lets you parlay any type of bet from over/unders to money line odds to futures whereas in the Pro-Line Stadium, they are separated.

A signup bonus of up to $200 cash value is also available for new players. So whether they are betting on the NBA Finals or the Stanley Cup Finals, there is plenty of room for fun. And profit.