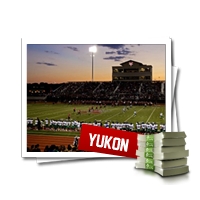 The Yukon is Canada’s smallest federal territory and with just over 37,000 people, it is just a few thousand over Nunavut as the least populated in the nation. It is located in the northwestern most part of Canada bordered by British Columbia to the south, the Northwestern Territories to the east, and Alaska to the west. Whitehorse is the only city holding over 23,000 people or 62% of the population. Although there are no sports teams, Yukoners are avid gamblers.

One would think Yukoners won’t have much to do but play games within the comfort of their warm houses. Alas, there aren’t many gambling options in Yukon. The Sports Select Pro-Line lottery schemes from the WCLC serve the denizens’ betting interests to a degree but many yearn for better options like these trusted online bookmakers below.

Outside of the 37 WCLC Sports Select retailers spread across 13 towns and hamlets, there really isn’t much gambling action in the Yukon. The Diamond Tooth Gerties Gambling Hall is the oldest casino in Canada and this betting hot spot in Dawson City, home to less than 1,500 people, it only opens from May to September due to the harsh weather conditions.

There are ongoing negotiations to offer first-class hotels and casinos. The Western Canada Lottery Corporation (WCLC) has a firm grip not only on the Prairies but the territories like Yukon. Unfortunate they didn’t go with the BCLC, which has the nifty online betting platform, PlayNow but Sports Select Pro-Line is serviceable to a degree. Just ignore the forced three-bet parlays and ludicrous TIE rules that have been the source of many frustrations. Still, it’s better than nothing.

The Sports Select Pro-Line isn’t entirely a ripoff. A few gamblers have won big with sharply calculated betting but for every winner, there are likely hundreds of losers and that’s because of how unfairly the rules oppress the bettors. Online sportsbooks make it easier for gamblers…

The Alternative To The Yukon Sports Lottery

With the Canadian sports lottery’s betting schemes, winning becomes even harder thanks to the handicaps they enforce on their bettors. Take this scenario as an example: Billy is super confident his BC Lions would beat the Winnipeg Blue Bombers but he can’t bet on just them.

He has to add two more bets on it. So he takes the Edmonton Eskimos and adds an NHL bet: the Pittsburgh Penguins. The games go and as expected, the Lions crushed the Bombers by 17 points. One down. The Penguins ran over their opponents by three goals. Two down. Now the Eskimos play the Argonauts. The game is close and the Argos are up late but thanks to heroics from the Eskis’, they eke out the win: 31-29. Billy is ecstatic. He just won over $700 on a $100 bet.

But wait. He’s been informed his bet lost. Later does Billy realize the Eskimos’ two-point win did not cover the Pro-Line’s TIE requirements (because CFL winners have to win by four or more points). Billy was just tipped off a $600 profit. Terrible! Fortunately for Billy and every other Canadian gambler, there are great online books like SIA, which do away with these silly parlay requirements and TIE rules. And they also offer signup bonuses up to $200 in cash value.

No more heartbreaks for Billy or anyone else ever again.