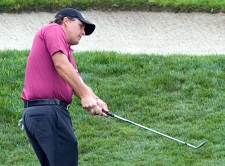 The PGA Championship is the final major of the season and will celebrate its 100th anniversary in 2016. This competition started in 1916 as a match play tournament, dominated by legends such as Sam Snead, Ben Hogan and Byron Nelson. The open era of the PGA Championships started in 1958, hosting the achievements of greats such as Gary Player, Lee Trevino and Jack Nicklaus. Whistling Staits and the Valhalla Golf Club are two of many prestigious courses that alternate hosting duties for this tournament.

The last chance to wager on a major is the PGA Championship, which normally takes place just before the Labor Day weekend. Sportsbooks tend to offer similar odds to bettors, so online wagering services compete for business by offering various bonuses and promotions to both newcomers and veteran players. Check out this list of sportsbooks to see which one works best for your betting style.

The PGA Championships cycle through a variety of top-notch courses, making it difficult for anyone but the best golfers to repeat as champions. Few have been able to do it, with Rory McIlroy, Tiger Woods and Vijay Singh being the most recent multiple winners. For the most part, the tournament takes place on golf courses in the eastern portion of the United States, although the 2020 event is slated to take place in San Francisco.

The 2015 edition is taking place at Whistling Straits in Kohler, Wisconsin. This is a links-style course that was built on top of an abandoned airfield along Lake Michigan, resulting in windy conditions that emanate from the water. The course features large rolling greens, grass dunes, deep bunkers and its own flock of sheep.

What Type Of Player Thrives At the PGA Championship?

The recent trend at the PGA Championship has resulted in more international winners than American victors, with foreign golfers winning five of the last seven competitions. However, the last time that an American golfer wasn't winner or runner up was in 1995, when Steve Elkington and Colin Montgomerie finished first and second.

Rory McIlroy has dominated this event over the past few years, including an incredible performance in 2012 when he set the record for biggest winning margin at the PGA Championships, finishing 8 strokes better than runner-up David Lynn. Despite being a two-time winner, an injury playing football and tight competition threaten to prevent Rory from winning his third title. Jordan Spieth, who has been on a tear, will probably be favored as he continues to wreak havoc on the tour.