Betting on The Masters Golf 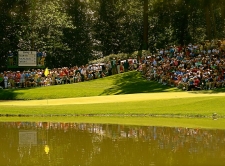 The Masters was established in 1934 at the Augusta National Golf Club in Augusta, Georgia and has been hosted there ever since. Most major PGA championships switch from venue to venue, but the Masters is the only major that uses the same course every single year. Even though the location of the Masters hasn't changed, the course itself has been changed many times, as course architects have re-arranged tees, holes, trees, bunkers and other hazards to create a challenge for the best golfers in the world.

Top Online Golf Sites for Betting On The Masters in Canada

Canadian golf fans love betting on The Masters, especially considering the fact that it's held at a consistent location year after year. This makes it a bit easier to know which players tend to be comfortable playing this tournament. Online sportsbooks provide you with the option of adding a little bit of excitement to the tourney through wagering on the results, whether it's the winner of the tourney or you're just putting down money on a golfer hitting the fairway with a solid drive.

Handicapping The Masters is a bit easier than other golf majors because of the consistent location of the course. Several trends have emerged among winners, providing useful information before determining your wagering strategy. The last player to win their first run at The Masters was Fuzzy Zoeller, who achieved the feat in 1979. The oldest winner was Jack Nicklaus at 46, who won his last Augusta championship in 1986. Finally, more than 95% of winners at The Masters over the past couple of decades have previously shot a sub-70 round before winning the tournament for the first time.

What Type Of Player Thrives At The Masters?

The Masters tournament is called that for a reason. Typically, this tournament is dominated by the best, offering few surprises in terms of a winner. Ten winners at The Masters since the year 2000 have been American. One odd trend that looks to continue is the fact that European golfers haven't won since 1999, when Jose Maria Olazabal earned his second championship at Augusta. Interestingly, The Masters was the site of only the second left-handed golfer winning a major, when Mike Weir put the Green Jacket over his shoulders in 2003, also becoming the only Canadian to win a major PGA golf tournament. Phil Mickelson won the next year, resulting in the incredibly rare occurrence of two lefties winning a major in back-to-back years.

In the foreseeable future, it appears that Jordan Spieth will look to continue his trend of dominant play in PGA majors, following in the footsteps of greats like Jack Nicklaus and Tiger Woods, who have won multiple events at Augusta.