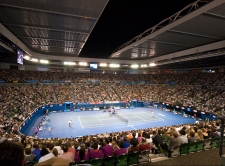 The Australian Open is the first of four grand slam majors on the ATP tour. Established in 1905, this tournament has had to deal with a variety of issues due to its remote location compared to the other three grand slams. Prior to the 1980s, many of the best tennis players didn't bother making the trek to compete in the tournament. Currently, top players like Federer and Nadal believe the event starts too early in the year. Nonetheless, the Australian Open is still the second-best attended tennis tournament behind the U.S. Open and one of the favorites for tennis wagering enthusiasts.

Canadians looking to get in on the action of the Australian Open have a variety of sportsbooks from which to choose. Some wagering service providers offer a free bet when you join up while others offer more than just a welcome bonus, such as ongoing rebate programs that give you a bit of cashback on all your bets. Be sure to check out rollover requirements when selecting a sportsbook, as that type of restriction may make it difficult to use your bonus bets.

The Australian Open features the hottest temperatures of any grand slam major and was the first to hold matches indoors due to heat and precipitation. This represents a unique challenge for players who are used to cooler temperatures. Warmer weather causes tennis balls to bounce higher and extreme heat may also cause minor warping and other imperfections on court. Players also complain of a lack of prep time for this tournament after the Christmas and New Year holidays.

Despite complaints that the tournament is held too early, preventing players from hitting their top form, 10 out of the past 12 Australian Open champions have been Roger Federer, Rafael Nadal and Novak Djokovic, suggesting that opinions about the Aussie Open are incorrect. Just like any other grand slam event, the heavy favorites are more likely to win, regardless of preparation and court conditions, both of which represent a uniform challenge to all tennis players.

What Type Of Player Thrives At the Australian Open?

Similar to the other Grand Slams, over the past decade or so, Federer, Nadal and Djokovic have dominated, although for the Australian Grand Slam, it appears that Djokovic is the one to beat for the immediate future as Andy Murray attempts to claim his first Australian grand slam title.

While bettors should never count out Nadal or Federer, it appears that stars like Stan Wawrinka and Marin Cilic will also challenge to add to their grand slam titles.

Similar to the other grand slam majors, the women's tournament is simply dominated by Serena Williams, who has to be considered the overwhelming favorite in every tournament she enters. The most likely underdogs are previous grand slam winners Li Na, Maria Sharapova, Petra Kvitova and Victoria Azarenka.