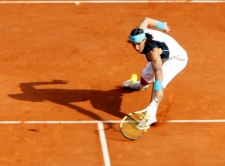 The French Open is one of the most unique sports tournaments in the world, especially when you consider the radical difference that the clay court has upon the game of tennis. Very few major international sports feature playing surfaces that differ as much as tennis, and the French Open is one of the best examples of this phenomenon. The beautiful red clay courts of Paris slow the game down, leading to long rallies, crazy spins, extreme shot angles and more strategic play than you would find on hard or grass courts.

When it comes to betting on the French Open, plenty of online sportsbooks serve Canadians seeking to enjoy a piece of the action. For the most part, sportsbooks have the same types of plays and odds that you'll find with most oddsmakers. The main difference between these sports wagering services tend to be the bonuses and free bets that they offer. Some even end up providing a weekly rebate on your bets.

The second of four major grand slam events on the ATP tour, the French Open is played on the crimson clay courts of Roland Garros. This event started in 1891, hosted by the Tennis Club de Paris, before moving to Stade Roland Garros in 1928. The clay surface not only gives this tournament its signature look, but it also causes the ball to slow down significantly, extending the length of points and favoring baseline strategists able to leverage small advantages into winners.

Slowing down and emphasizing strategy over whipping aces and forehand winners results in a much more physical match, causing the French Open to be considered the most grueling tennis tournament in the world.

The clay has claimed the grand slam ambitions of many hard court and grass court legends, including Novak Djokovic, Venus Williams, John McEnroe, Virginia Wade and Stefan Edberg, all of whom had difficulty with the slower pace of tennis.

What Type Of Player Thrives At the French Open?

Over the past decade, the Spaniards have dominated the men side of the draw while the competition for women has featured a more diverse set of champions, with the exception of the years in which Serena Williams decides to dominate.

Rafael Nadal has ruled this tournament like no other, eclipsing the achievements of Bjorn Borg by winning the title nine times. Since the turn of the century, other than wins by Swiss players Roger Federer and Stan Wawrinka, all French Open champs have been Spanish, Brazilian or Argentinian.