Betting on US Open Tennis 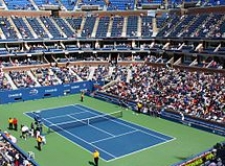 For the most part, tennis is known to be one of the most restrained sporting competitions in the world, in particular tournaments like Wimbledon, which have strict rules of conduct that includes a dress code for players. The U.S. Open turns that stereotype on its head as the most raucous of all grand slam tennis events on the ATP tour, as Flushing Meadows swells with tennis fans from New York and around the world who loudly cheer their favorites.

Plenty of Canadians love betting on the U.S. Open because it's easier to follow the tournament without the huge time difference whenever an event takes place overseas.  In particular, some late-night matches prove to be huge thrillers that have tennis wagering fans on the edge of their seats. Plenty of online sportsbooks are willing to take your action, but you should consider what they're willing to do for you in terms of bonuses and promotions before you decide to sign up.

The U.S. Open started in 1881, making it the second longest running grand slam tourney on the ATP tour. This event was played on grass courts for nearly a century, before switching briefly to clay courts for a couple of years then settling on its current hard court arrangement. The hard court surface results in an extremely quick ball that bounces hard and high, increasing the effectiveness of the power game and approaching the net strategically.

Unlike the French Open, which is played on a slower clay surface, the U.S. Open caters to players who love to smash away from the baseline, overpowering their competition rather than constructing winning points through crafty strategies.

One of the most unlikely Grand Slam wins took place in New York when Juan Martin Del Potro knocked off Rafael Nadal in the semi-finals before taking the championship from Roger Federer in five exciting sets in 2009.

What Type Of Player Thrives At The US Open?

Despite the fact that the U.S. Open is the most unpredictable of all the Grand Slams, the trend has still been the dominance of the big four of Federer, Nadal, Novak Djokovic or Andy Murray. However, the 2014 championship resulted in an unexpected final between Kei Nishikori and Marin Cilic, which could represent a push further away from the dominance of the big four.

For the women's tournament, to be completely frank, it's difficult to point to a likely champ other than Serena Williams until she decides to stop winning. Like the men, hard hitting women with strong serves and blistering forehands have the best chance of winning.

Sounds simple, but the fact of the matter is that the U.S. Open is usually taken by the best player, rather than the player best suited for the surface, like the French Open. Roger Federer pulled off five consecutive U.S. Open Championships between 2003-2007 while Serena Williams looks to win her fourth straight U.S. Open in an effort to become the first woman since Steffi Graf to win all four slams in a single year.