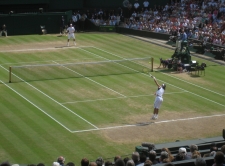 The longest running tennis tournament in the world is Wimbledon, which was established in 1877. This competition is so prestigious that the total prize money of £100,000,000 was raised without having to sell advertising space on the courtside. Literal royalty attend matches while spectators much on strawberries and cream. If you can't make it to the All England Lawn Tennis and Croquet Club, the next best thing is to place a few wagers with a legit sportsbook to spice up the action.

Wimbledon is one of the premiere sporting events in the world and a terrific opportunity for tennis aficionados to show their superior knowledge of the tournament by picking unexpected winners. Despite the time difference, Canadians love betting on Wimbledon, especially when grass court wizards like Milos Raonic and Eugenie Bouchard line up to play. It's a good idea to check out different sportsbooks to see which ones give you the best promotions and bonus plays, especially wagering services with very little rollover on bonus bets.

The combination of soft bounces that seem to cause the ball to die quickly with the lightning-fast pace of the ball skidding off the grass makes Wimbledon perhaps the most difficult tournament to win due to the combination of skill, speed and power that champions need to survive the tournament.

Back in the day, serve and volley experts like Pete Sampras, Goran Ivanisevic and Boris Becker were considered the best bet to win, although a wider set of skills, in particular shots from the baseline, became a greater requirement after Ivanisevic won one of the most insane tourneys against Patrick Rafter. Goran is the only player ever to win a grand slam title as a wildcard qualifier, when he entered the 2001 tourney ranked 125th.

The most successful tennis players during the open era at Wimbledon have been Roger Federer and Pete Sampras, both of whom have won seven titles each. Bjorn Borg dominated with five consecutive victories during the late 1970s.

What Type Of Player Thrives At Wimbledon?

There was once a time where grass court specialists with impeccable serve and volley skills were expected to dominate the grass court, but since 2003, either Roger Federer, Rafael Nadal, Novak Djokovic or Andy Murray have earned the title as champs. In the foreseeable future, the trend is unlikely to change, although rising ATP tour stars like Stan Wawrinka, Marin Cilic and others look to forge their own history.

The women's tourney is similarly predictable, with the Williams sisters taking an incredible 11 titles since the year 2000, with Petra Kvitova taking two of the remaining five titles up for grabs. The only other women to win a title this century are Maria Sharapova, Marion Bartoli and Amelie Mauresmo.

The sheer amount of history and prestige that Wimbledon represents makes it one of the most pressure-packed scenarios in the world of tennis, causing great players, like Ivan Lendl, to choke when their moment on the biggest tennis stage arrived.