After a very engaging regular season the six playoff teams have been determined. This Sunday November 11th, the CFL playoffs kickoff. Before we look at the Odds to win the Grey Cup lets examine the playoff bracket: 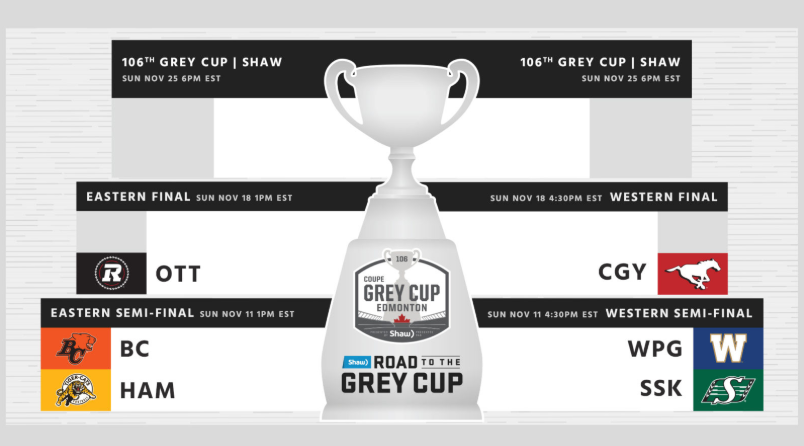 The Ottawa Redblacks and Calgary Stampeders have earned 1st round byes while this weekend the BC Lions will face the Hamilton Ticats in the Eastern Conference semifinals and the Saskatchewan Roughriders will play the Winnipeg Blue Bombers in the West to see who advances to the conference finals.

After the Calgary Stampeders posted the best record in the CFL regular season at 13-5, the books have listed them as prohibitive favorites to win the Grey Cup.

After the heartbreaking fashion in which they lost last season's Grey Cup final 27-24 to the Toronto Argos, and with this Grey Final being hosted in their province, this organization will be looking to make things right this November.

However they are not entering the playoffs in peak form. After starting the season 7-0 they cooled off towards the end of the season losing 3 of their last 4 games overall and hardly looking like the invincible side the started the season as.

And as there is little value in betting such a big favorite, even though they were the best team in the league, let me make the case for another side, the Saskatchewan Roughriders at +400

The Saskatchewan Roughriders, one can argue are just as good as the Stampeders. Now they first have to get past the Winnipeg Blue Bombers at home this Sunday which they will be favored to do. In their only home meeting with Winnipeg this season they emerged with a 31-23 victory.

And if they can advance this to face Calgary the following weekend, their backers should feel confident about their chances in the Western Conference Finals, considering they have already beaten the Stampeders in Calgary this season, and went 2-1 against them in the regular season.

Going 12-6 in the regular season, they were just as good on the road as they were at home posting identical 6-3 records. Furthermore the Roughriders are red hot heading into the playoffs having won 6 of their last 7 games and it's usually the in form team that online sports bettors should be looking to back come playoff time.