Although they have shuffled the deck somewhat, the defending Grey Cup Champion Calgary Stampeders roll into the 2015 CFL season as the odds on favorite to win it all again. Back-to-back winners have been rare in the CFL recently as the Montreal Alouettes (2009-10) are the only team to do the double over the last eighteen years. While the losses of talent like OL Brett Jones, DB Keenan MacDougall and LT Stanley Bryant hurts - it’s part of the process in the CFL salary-cap world. Calgary is the deepest team and they will once again be the best team in the league.

Having already announced that this is his last season as the Stamps head coach, this is your last chance to take advantage of the genius that is John Hufnagel. At 63 years old, Hufnagel will focus on his GM duties when former Calgary All-Star QB Dave Dickerson takes over as head coach for the 2016 CFL season. If anything remains constant in Calgary, it’s the fact that the Stampeders have the best coaching Crew in the CFL. The addition of return specialist Tim Brown, who will also join studs like RB Jon Cornish, and QB Bo Levi Mitchell on offense, is a nice new twist in the Stamps mix.

2015 CFL Grey Cup Futures Prediction: We strongly feel that Calgary is once again the class of the CFL. While it’s never easy to repeat as Champions, in any sport, the Stampeders have the horses to get it done. We are backing the Stamps with a 500 unit wager on the 2015 Grey Cup futures line posted on the betting board at SportsInteraction. Load up while the Grey Cup prices are ripe!

Grey Cup 30-10-15 Futures Update: With Edmonton on the verge of gaining a bye during Week 1 of the CFL playofs, plus home field advantage for the West Final, we need to back up this futures bet. Feeling the Grey Cup trophy is going to stay in Alberta, we are adding a 600 unit wager on Edmonton. If the Stamps win our return is 1050 units - Esks win the return is 550 units. 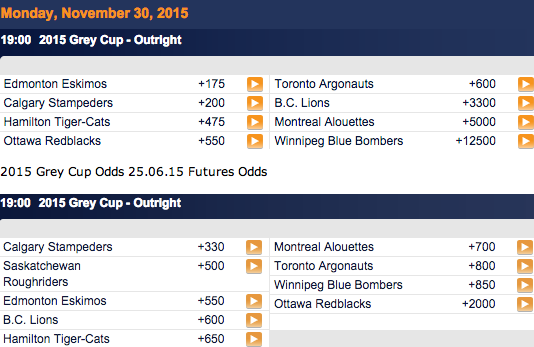