Triple Crown final thoughts prior to our MLB discussion

Though rarely ones to toot our own horn, we hope everyone loaded up and prospered on the TC Championship romp by the Ruler of the Racetrack. In addition to spelling out the winner, twelve days before the horses hit the starting gate, we also delivered the best Belmont Stakes futures prices. We are proud to bring you well researched betting advice and we work hard to earn your trust. Hope everyone enjoyed the ride and Congratulations and Thank You to American Pahroah!

Pittsburgh Pirates: Slow MLB season start is steadily becoming a thing of the past

Following a sluggish 18-22 MLB season start, Pittsburgh is one of the hottest teams in the Majors. Thanks to a nice mix of solid pitching and booming bats, the Pirates are on a 13-3 recent run though they still trail the National League Central leading St. Louis Cardinals  by 6.5 games. Aiming for a seventh straight win, RHP A.J. Burnett (6-1 ERA 2.20) heads to the bump for the Buccos. Burnett faces a Milwaukee team that’s sporting a Major League worst 20-37 record and the Brew Crew are an astounding 18 games out of the NL Central race. Brewers RHP Jimmy Nelson (2-6 ERA 4.41) looks to snap a personal two game losing streak, a run that includes one no-decision, after giving eleven runs (10 ER) on 14 hits during his last eleven innings pitched over two starts.

Pirates vs Brewers MLB Prediction: If there’s a note of caution here, it’s the fact that Burnett has allowed nine runs (8 ER) during his last two starts. On the flip side, the Pirates have scored at least four runs in 13 of their last 16 contests so run support should not be a problem here. Pittsburgh is 5-1 versus Milwaukee this season and they have outscored the Brew Crew by a 33-17 margin. Nelson pitched well in his first two starts versus Pittsburgh as he allowed just two runs, on seven hits over twelve innings, but he has regressed some since then. Still, that’s enough for us to steer clear of the run line here. Instead, we are backing the Buccos with a 500 unit wager on the money line odds posted on the betting board at the UWIN online sportsbook. 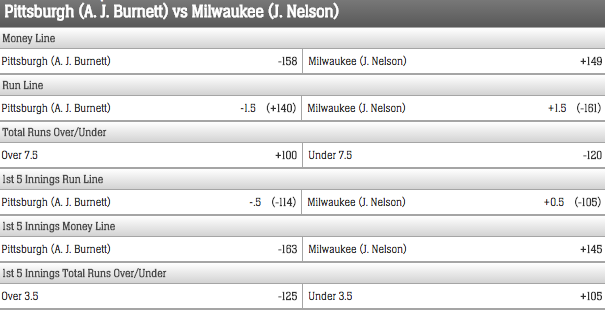