MLB Parlay Betting Prediction: Tie the Dodgers and Nationals Together

Washington vs Arizona: MLB Duel in the Desert

After a slow start to their season (7-13) the Nationals are heating up as they have won ten of their last twelve games. Can anyone cool down Bryce Harper? The Nationals slugger has been light outs recently as Harper is 8-16 with six homeruns and 13 runs batted in during his last four games. Although he has scuffled some, allowing 15 hits and six runs over his last 14 innings pitched, we like RHP Max Scherzer on the bump for Washington here.

Following a soggy/snowy weekend in Colorado, the Dodgers return home to sunny California to host Miami tonight. Los Angeles has won eight of ten and they own a 4.5 game lead in the NL West. RHP Zack Greinke (5-0 ERA 1.56) heads to the hill for the Dodgers. After a four-game split in San Francisco, Miami heads south to duel with the Dodgers at Chavez Ravine. The Marlins have had a streaky May, as they are 5-5 over their ten contests played this month.

Nationals and Dodgers MLB Parlay Prediction: We love that we are getting the better teams who have a decided edge on the bump in both theses contests. Give us Los Angeles and Washington with a 300 unit parlay wager on the money line odds posted on the SportsInteraction betting board. 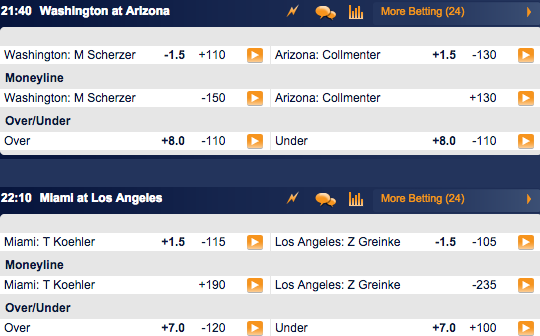