Clinging to a slim 1.5 game lead in the NL East over the Washington Nationals, New York (36-32) looks to snap a two-game losing streak tonight. RHP Jacob deGrom (7-4 ERA 2.33), one of the hottest pitchers in baseball, gets the call for the Mets here. After posting mixed results during his first six starts, deGrom has been lights out lately. A stud amongst studs, deGrom has allowed just six earned runs and he has recorded 53 strikeouts over his last 43.1 innings pitched.

Atlanta Braves: Hot season start, albeit short, is a distant memory in Georgia

Atlanta has been largely inconsistent since they opened the MLB 2015 season with a 6-1 start. June has been rough for the Braves as they have posted a 7-10 record this month. Pitching is a problem in Atlanta as the Braves are 25th in runs allowed (302) and their 4.17 team era is 24th in the Majors. After posting a 3-4 record, with a 4.29 ERA in 12 starts at Triple-A Gwinnett, RHP Matt Wisler makes his MLB debut tonight. Atlanta has lost six of their last seven games versus the Mets.

Mets vs Braves MLB Prediction: Though not exactly a juggernaut on offense, the Metropolitans are averaging just 3.75 runs per game, we like the pitching matchup in this contest. Being as such, we are backing New York with a 500 unit wager on the money line price posted on the betting board at the William Hill sportsbook. Link to William Hill through the odds image below! 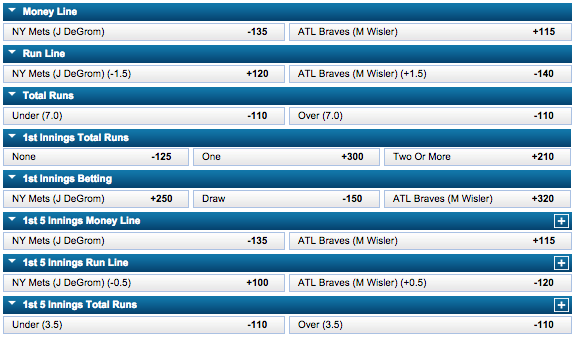