New York vs Carolina: Islanders Aim to Storm Past the Hurricanes

Following a season where they lost their leader John Tavares to injury, and finished with a 34-37-11 record, New York is one of several surprise teams in the NHL as they currently occupy the top perch in the Metropolitan Division. It's a slim lead, by just two points over Pittsburgh who have two games in hand, but with 25 games to play the Islanders (37-19-1) have surpassed their win total from a year ago. New York will be an ornery group as they had a four game winning streak snapped after giving up two-goal leads three times versus the Rangers during a 6-5 loss in Uniondale last night.

Carolina Hurricanes: Downgraded to a spoilers role as they play out the string in Raleigh

As is the case in most instances in life, if you start out behind - you will usually stay behind. That's the scenario in Carolina this year as the Hurricanes opened their season with a 0-6-2 record and never recovered. Though they have played better recently, posting a 10-5-3 record since the start of January, Carolina is 17 points out of the eighth and final playoff position in the Eastern Conference. It all adds up the the 'Canes missing the the NHL playoff party for a sixth straight season.

Islanders vs Hurricanes Call: Like New York, Carolina is playing on back-to-back nights with travel. The Hurricanes stormed past the Senators with a 6-3 win in Ottawa last night. In addition to those of the Penguins, New York is now hearing the footsteps of the hard charging Rangers and Capitals as just five points separate the top four teams in the Metropolitan Division. How the young Islanders respond during the postseason chase is still to be determined. Earning two points against an NHL cellar dweller is a solid start. Back Tavares & Crew with a 400 unit money line wager at William Hill. 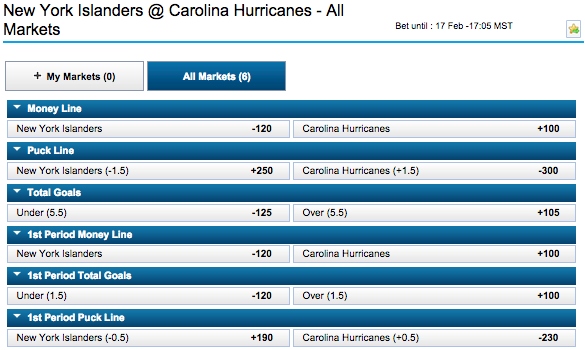