Winners of four straight, and eight of their last ten games, Pittsburgh has climbed to within 4.5 games of the St. Louis Cardinals in the National League Central Division. The Pirates have posted a pair of late inning come from behind wins over the Padres during the first two games of this series. After walking off in the ninth inning during a 2-1 victory on Monday, Pittsburgh produced a run in the eighth inning to secure a 3-2 win last night. We see the Buccos breaking out the bats here.

Riding a four game losing streak San Diego is steadily sinking in the National League West division. The Padres are on a 7-15 recent run and their 39-47 overall record has the Friars 8.5 games behind the Los Angeles Dodgers. Struggling at the plate, on defense, and on the bump, San Diego has been outscored by a 105-62 combined count over their last 22 contests. The Padres are 21st overall with 52 errors committed that have led to a league high 46 unearned runs allowed.

Padres vs Pirates MLB Game Total Prediction: We get a less than stellar battle on the bump tonight as RHP Charlie Morton (6-2 ERA 4.30) gets the call for Pittsburgh and RHP Andrew Cashner (3-9 ERA 4.06) starts for San Diego. Seven or more runs have been scored during eight of Cashner’s last ten starts. Morton has allowed 16 runs over his last 12.2 innings pitched and six of the Pirates last ten contests have produced seven or more runs. We are backing OVER with a 500 unit wager on the six runs posted as an Alternate Over/Under line at SportsInteracion. 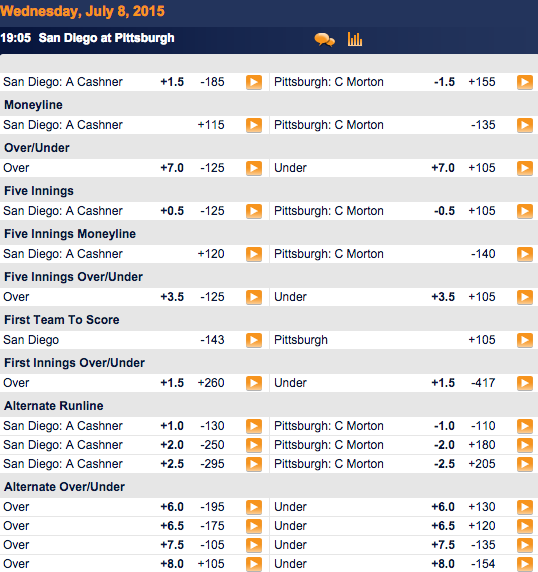