Sporting two of the best pitching staffs in baseball, the Nationals and Dodgers lead the National League and all of baseball as the top futures favorites to win the 2015 World Series. While Washington and Los Angeles are close – there’s a fairly steep drop off to fellow NL mates St. Louis and the Anaheim Angels who are top preseason chalk out of the American League. The Seattle Mariners, who are adding young guns around King Felix, round out the top five Fall Classic favorites

It has been a while since online sportsbooks didn’t have perennial favorites, like the Yankees, Rangers and Phillies, at or near the top of their preseason MLB Championship betting board. New York opens their season without Derek Jeter for the first time since 1996, Texas is looking to rebound from their worst season since 1985, while Philadelphia appears headed to their first last place finish in the NL East since Y2K hysteria gripped the planet. There's nothing more to see here.

MLB 2015 Fall Classic Call: Futures odds in baseball, perhaps more so than any other pro sport, are very telling. When bookmakers are doing their homework - they begin by researching the pitching staff of every team in the league. Liking the arms, plus the bats, in LA and The District, we can’t see Los Angeles or Washington not representing the National League in the 2015 World Series. Opening a path to some possible guaranteed winning wagers come October, we begin by backing the Nationals (275 units) and the Dodgers (225 units) using the futures odds posted at the Bet365 sportsbook. Spring is about to be sprung - Happy Daylight Savings Time North America! 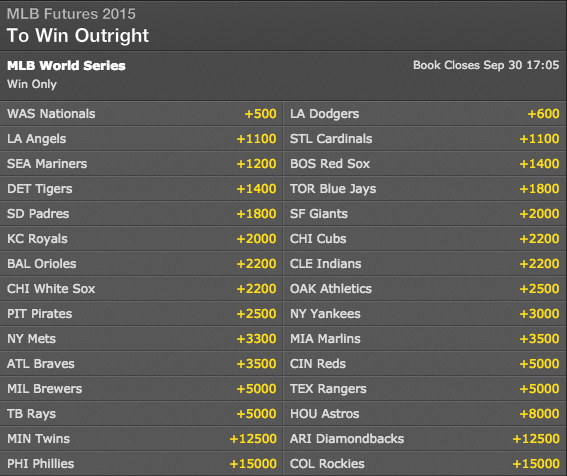