It seems as though every team has a Swiss Army knife style running back in the NFL today. They are versatile play makers who not only spell the starters when they need a rest but also get their share of rushing and passing plays. Shane Vereen has filled that role in New England for the the past four seasons. Vereen posted 838 total yards with five TD during the regular season. In the Patriots two playoff games, Vereen recorded 45 and 43 total yards versus the Ravens and Colts respectively.

Though every backup aims to be "The Man" at some point in their career, some nuts are tougher to crack than others. That's the case in Seattle where RB Robert Turbin has been playing second fiddle to Marshawn Lynch for the past three seasons. That could change moving forward though as Beast Mode is clearly not happy in Seattle. Turbin posted 496 total yards and 2 TD during the regular season but he has been largely absent with just 25 totals yards in the Hawks two playoff games.

Backup Running Back Prop Betting Call: The difference between these two backups is clear as the Patriots include Vereen in their game planning while Turbin is predominantly a mop-up time player. Vereen had 148 touches during the regular season compared to just 90 for Turbin. William Hill bookmakers have posted Vereen with a 40.5 total yards Over/Under price - a number that he has surpassed in eleven of 18 games this season. We are backing the OVER with a 110 unit wager here.

Anticipation is building! Stick with us as we'll publish our final thoughts and Super Bowl XLIX game day call on Sunday. In the meantime, click on the image below to link to the William Hill sportsbook and check out the amazing array of wagering options on their Super Bowl Sunday betting board. 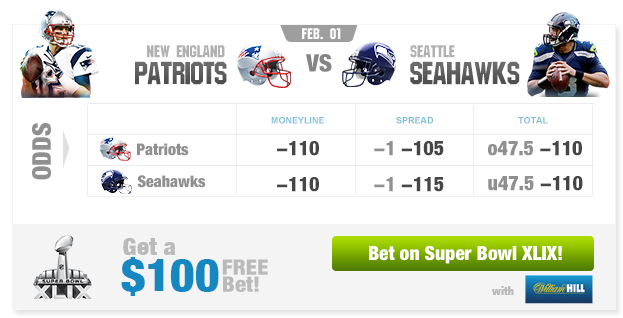