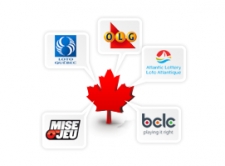 When Ontario finally joined the other Canadian provinces in the establishment of a lottery and gaming corporation, the decision was made to create an organization that would be able to coordinate national contests. The result was the establishment of the Interprovincial Lottery Corporation in 1976. Currently, the ILC runs out of Toronto, Ontario, supported by just over a dozen coordinating employees. [+]

Since the ILC is concerned strictly with national lottery products, the organization only runs a few regular games, including the popular Lotto 649, Lotto Max and Celebration lotteries. Previously, they were responsible for Lotto Super 7 and Millionaire Life games.

Interprovincial Lottery Corporation member organizations work together to ensure that all provinces benefit from national lotteries such as Lotto 649, Lotto Max and other national lottery games. Each of these organizations take care of promotional concerns in their own jurisdiction, while the ILC ensures that the implementation of the games proceed in a smooth and fair manner.

Atlantic Lottery Corporation: The Atlantic Lottery Corporation is an entity that consolidates gaming and lottery through several east coast provinces in Canada. Member provinces include Newfoundland and Labrador, New Brunswick, Prince Edward Island and Nova Scotia. Roughly speaking, the ALC accounts for a similar amount of funds created as the province of Quebec. Based in Moncton, New Brunswick, this organization was founded in 1976 and has been cited for its fast adoption of wagering and gaming innovations.

Ontario Lottery and Gaming Corporation: By far the largest provincial lottery body, the Ontario Lottery Corporation was inaugurated in 1975, lagging somewhat behind other provinces which embraced gaming and lottery entertainment as a method of revenue generation. The OLG generates a whopping seven billion a year in revenue, which supports the creation of more than 17,000 jobs. This organization is also known for its involvement in the development of high end casinos, such as Fallsview Casino.

Loto-Quebec: The second largest lottery crown corporation is Loto-Québec, which was also the first of the provincial gaming organization to be created. Similar to the OLG, Loto-Québec operates high end casinos such as Casino de Montréal. This is one of the few gambling organizations that have moved away from Pro-Line, instead operating their own version of limited sports wagering, called Mise-o-jeu. Québec is also known for a variety of gaming halls that allow video terminal gaming activities.

Western Canada Lottery Corporation: The Western Canada Lottery Corporation is the second oldest provincial gaming organization in Canada, created in 1974. Currently, the member provinces of the WCLC include Alberta, Saskatchewan, and Manitoba. Canadian territories under the WCLC include Northwest Territories, Nunavut and the Yukon. Before 1985, British Columbia was also a member, before the province decided it was large enough to create its own gambling body.